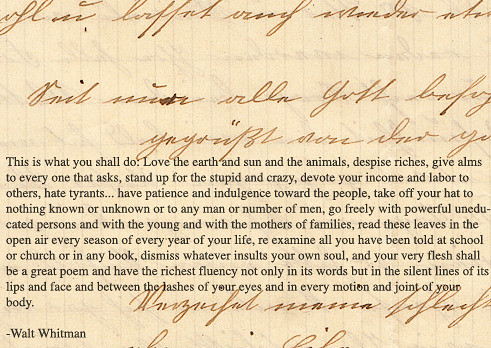 Add away, but please don't add me without commenting. That's just weird, and it takes like, 2 seconds to comment so don't be a lazy fuck.

Change.org|Make Your Own Petition
It's supposed to be a widget, but the html isn't working. :/ The change.org link will take you to the page.

Archivists’ On to Ottawa Trek – May 28

On April 30, 2012, Library and Archives Canada (LAC) eliminated the National Archival Development Program (NADP), a $1.7 million contribution program administered for the LAC by the non-profit Canadian Council of Archives (CCA) and distributed to 13 provincial and territorial archives councils to support archival activities locally.  Through these councils, NADP funding is on the ground in our 10 provinces and 3 territories, ensuring that Canada’s history is preserved in local communities.  Canada’s archival councils provide support to archives and archivists so that they may better serve all Canadians.

The NADP was a vital component of LAC’s legislated responsibility to foster preservation, promotion and access to Canada’s documentary heritage. As stated in the Act:

7. The objects of the Library and Archives of Canada are…
(b) to make that heritage known to Canadians and to anyone with an interest in Canada and to facilitate access to it;…
(f) to support the development of the library and archival communities.

8. (1) The Librarian and Archivist may do anything that is conducive to the attainment of the objects of the Library and Archives of
Canada, including:
(i) provide professional, technical and financial support to those involved in the preservation and promotion of the documentary heritage and in providing access to it;

NADP was a joint federal/provincial/territorial initiative; NADP, and its predecessor financial assistance program, was a critical source of funding to the community – CCA has operated for 26 years; elimination of NADP means that 11 of the 13 provincial and territorial councils will collapse within 30 days to 6 months, without any financial support. A number of councils have suspended their operations. Archival institutions that invested precious resources into the preparation of NADP funding applications were forced to suspend projects that had already been approved by the CCA. The CCA’s physical office in Ottawa will close its doors to the public effective May 4, as the organization moves to a virtual office and staffing has been immediately be reduced from 8 FTE to 4 FTE, and will soon be further reduced to a maximum of 2.5 FTE. Consequently, archives’ mandate to make government transparent, to make information available to citizens, and to preserve records of Canadian culture and society will be greatly diminished.

In addition, the federal government has sent more than 500 surplus notices to Library and Archives Canada, which will ultimately have its staff reduced by 20%.  LAC has also cancelled its Inter-Library Loan program; cut reference staff; imposed a "new service model" that requires the public to make an appointment for reference requests; cut library cataloguers by a third; and cut private archivists and media specialists by 35%, which means not only that significant Canadian heritage will not be acquired, but that researchers will not be able to talk to experts who knew their fields as these experts simply won't exist any more.  At the same time, the government unilaterally shut down libraries in the Transport, Immigration, and Public Works departments.

The effect of these cuts and closures are absolutely devastating and amount to nothing less than a merciless attack upon the archives community and those who depend on access to archives for their work and study.  But these attacks are not isolated; the Conservative government has systematically targeted organizations and institutions that collect, preserve, analyze, and make available information for Canadian citizens. Statistics Canada was previously the target of Tory assaults, as was the Polar Environment Atmospheric Research Laboratory (PEARL) in Eureka, Nunavut.  Statistics Canada was forced to abandon the mandatory long-form census, which was vital for distributing government resources on an equitable basis, while PEARL research was instrumental in collecting data related to global warming. Furthermore, in a time of supposed austerity the Conservative government has allocated an additional $8 million dollars for the Canadian Revenue Agency to target registered charities engaged in political activities.

On May 28, join us in the Archivists’ On to Ottawa Trek.  Like our forebears in the 1935 On to Ottawa Trek who protested government mismanagement during the Great Depression, angry archivists and our allies from coast to coast will descend on Ottawa and other locations across the country on May 28 and we will be heard.

For more information, check out:

Blog posts by archives in response to the NADP cut: